Good afternoon, everyone in Kagoshima.

Thank you so much for coming to our "Prayer of Love and Peace Performance" today, on this beautiful day with the sky clearing up.

I am Kouken Yamato, representative of INAMORI Art Project Group.

I would like to express my hearty gratitude to the Performance Committee members, and Kagoshima Prefecture Religionists Social Gathering for making our performance in Kagoshima come true like this, and to Kagoshima Junshin Girls' Junior/Senior High School Band who made a wonderful performance just now as our guest, and to all the supporters to us.

INAMORI Art Project Group was established around 8 years ago by Noriko Inamori, an ordinary housewife. At that time, she was suffering from an intractable disease. This group started with a couple of friends, under the founder, Noriko's wish to use her limited life time to hand a beautiful Earth to the children born in the future, and to use her remained power for it even a little. Everyone was an amateur and a volunteer, and at start this was totally an amateur group not knowing anything about theater and music.

However now, though imperfectly, we have become able to perform in front of you, and to convey our message to you in this way.

And today we have stepped on the ground of Kagoshima for the first time. We have been doing overseas performances including in New York for the past six consecutive years until last year. And every time we received warm-hearted support and resonance from the audience. Converting it into our energy, we are making effort everyday step by step with never giving up.

Unintentionally I answered then, "Because we ourselves are becoming happy when we are doing this activity."

Most of the IAPG members do not belong to specific religion, religious sector or group, however on the other hand, with worship and respect, most of us believe in the existence of God. Today, we have the audience of Japanese Shinto, too. Not a few IAPG members have personal faith in not only Mother Mary we featured in our performance, and Jesus Christ, Muhammad, Buddha, but also Shinto's gods, Amaterasu and Ameno-Minakanushi-no-kami.

One day, I heard somewhere about some teaching saying, "Every living thing, given its life by God, does not have 'the right to be happy' but has 'the obligation to be happy'".

The "Obligation" to be happy.

And I heard the meaning of the teaching was that God taught everyone, "You must be happy", and then everybody was given life from God here on Earth.

I was so impressed with it.

In order to be happy, however, you need to understand that only you alone cannot be happy. Your beloved ones, people around you, your colleagues and all the living things need to be happy, then finally you yourself can be happy, which I also heard there is such a teaching. Now we are doing this activity, and we truly understand the teachings.

I could feel that what we are saying we make people happy or we wish people to be happy means we are doing so for ourselves and we "are allowed to do" so for making ourselves happy.

I would say the person who showed us the model was also the founder, Noriko Inamori.

Sorry to say she returned to heaven in August 2013. Four plus years have passed since then, we have been doing this activity following her will.

Once I heard also at the same time that you make people happy and you yourself will become happy by doing so. The road of "faith" is teaching people of it.

If it is right, toward that most important purpose, all the Divine teachings, even though each teaching is slightly different each other, are rather wonderful and necessary under such differences, and we strongly believe it can be realized that each religion and religious sector thanks each other, comes together the power of each other, and takes a step forward on the way where everybody finds happiness following the Divine will, saying, "We are grateful if the people who didn't resonate with our teaching could perceive the truth, thanks to the other teaching with resonance."

Inamori stated the same thing, too.

We are doing this activity hoping to deliver this way of thinking to you as much as we could through our theater and music wrapping with our thoughts.

Next we would like to present the Second Part, a slightly mysterious theater, "Prayer of Mother Mary - A Miracle of Nagasaki". In this story we embedded our thoughts and our message to be delivered to you. We would be so happy if you would enjoy it to the very end. And taking this opportunity, we would be more than happy if we could walk even one step towards the same purpose with you from now on.

Thank you so much for joining us today.

Kouken Yamato
Representative IAPG
A message from Noriko Inamori "Peace and Unification of Religions"
"Differences among Religions, Differences among Doctrines. All Were Determined by the Divine Love." (Sunday, April 22, 2018 Message for Kagoshima Performance)
"In the world God created, the ARMY was created to SAVE people" (Friday, October 11, 2019 Message for New York Performance) 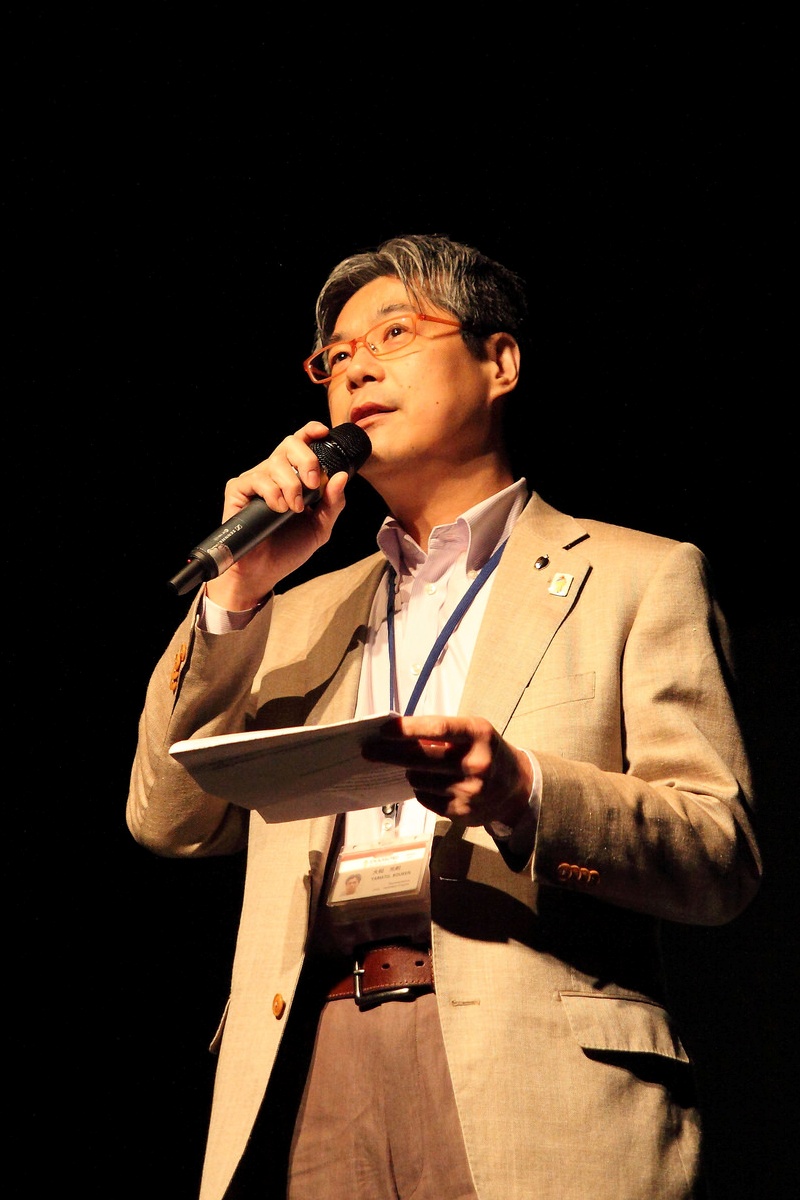